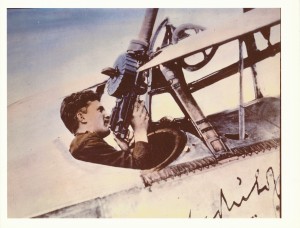 When I was a little girl, I used to sneak upstairs to my parents’ bedroom and rummage through my father’s underwear drawer. Ok, it sounds weird, but it was there, until the family donated them to Canada’s War Museum in the nation’s capital, that we kept my grandfather’s war medals.

War medals are a piece of history in anyone’s family. But my grandfather’s are in a class of their own. That’s because my grandfather is Billy Bishop, Canada’s and the Allies most famous World War One Flying Ace who shot down 72 German planes.

Billy’s only rival was Germany’s Baron Von Richthofen whose final score was 83 allied planes. Think Snoopy versus the Red Baron in the Peanut’s comic strip and you get the gist of the kind of mythical status my grandfather and these first knights of the air have achieved.

In fact, since his death in 1956, my grandfather has been the subject of books, documentaries and a highly acclaimed play called ‘Billy Bishop Goes To War’. There have been streets, bars, cafes and even a couple of airports named after him as people’s fascination with his unique place in history continues to this day and well beyond.

Sadly, I never knew him. Billy died when I was just three years old. Still because of his iconic stature, he has lived on both as an enormous influence in my own life but also in the imagination of thousands of others.

That’s because my grandfather is a brand.

And I think that’s how I became fascinated with branding in the first place. I always wondered – Do famous people develop a brand because they are famous? Or do they become famous because they have and know their brand?

What do you think?

I have concluded that it’s probably a bit of both. You don’t have to be famous person like Billy Bishop to have or know your brand – But you DO have to think like one!

(Next time: My 15 Minutes of Fame as The Hula Hoop Queen!)